I love the 80’s. I love everything about it. The big hair. The fashion. But most of all, I adore the music. I was only 12 when the 1990 arrived, but my taste in music definitely stayed in the Decade of Excess. In celebration of my new release, which focuses on a hot but tortured rock star hero, here’s my Top Ten list of Raddest Eighties Rock Songs, in no particular order of favorite, because let’s face it. No one can pick their favorite eighties song.

So what do ya’ll think? Did some of your favorites make my list? I have tons more, but this sampling covers various rock genres that made my adolescence rock.

And speaking of rock…check out my latest release. Flashback is already available for download at All Romance and Barnes&Noble and on pre-sale at Amazon. 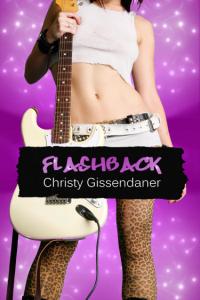 It’s 1985 and Percival Vane, the lead singer of Jericho, is the hottest thing in music. He has it all – the fans, the money, and a gig he adores – but underneath the smoke and flashing lights, he’s learned to bury his feelings. Battling lifelong addiction, he covers up the pain by pouring his heart into his music, penning lyrics that defy imagination and leave his fans breathless for more. Until the words stop coming.

Betsy Walker knows the dirty little secrets of life on the road. She was just such a secret, daughter of a popular 1960’s folk singer unwilling to compromise her career by raising a child. Betsy was weaned on glitter and disco, rocked to sleep by the strum of guitars. One thing she knows, she never wants to live the life her father set for her.

The absolute last thing Betsy wants is to fall for the lead singer of Jericho, who’s had more panties thrown at him on stage than most women wear in a lifetime. On summer break from college, she agrees to accompany her father on tour with Jericho and discovers beneath the guyliner and long hair is a songwriter who’s been misunderstood, molded into something he doesn’t want to be.

Can she help him find himself? Or will they both become victims of Percival’s quick rise to the top of the charts?